Apple is one of the leading companies that is renowned for its unique products and brand. A short talk with an Apple user reveals there is an emotional relation between consumers and Apple products, including every “i” product created in the past two decades.

Why are Apple products different from their competitors’ products? How does Apple manage to achieve innovation in its product families? Answering these questions provides interesting insight into Apple’s history and how it survived its most critical time between 1985 and 1997.

When Steve Jobs returned to Apple after being fired, the company share was only worth US $5 and its future was uncertain. Today, in 2016, Apple’s share price is around US $108 and the company achieved revenues of US $233.7 billion in 2015 with net income of US $53.39 billion.  This mini case study sheds light on the role that design thinking and innovation played in helping Steve Jobs rescue Apple with his consumer-driven strategy and vision for the company.

The Hard Times at Apple

The early days of Apple (which was cofounded by Steve Jobs on 1976) are characterized by its first personal computer that was delivered with Apple OS. During this time, Apple was dominating the market because there were no other manufacturers of this type of computer as computers were used only by governments or large companies. However, in 1985, Steve Jobs was forced to leave the company. This marked the start of a chaotic era in the company’s strategy and product development.

In the period 1985-1997, Apple struggled to achieve market success, especially after Jobs’s departure and increasing competition from other giants such as IBM, which decided to enter the PC computers market. During this period, Apple faced number of challenges including:

Apple is one of the leading companies in the field of innovation and this couldn’t have happened without the company adopting design thinking. Design thinking is a solution-oriented process that is used to achieve innovation with considerations about the consumer at the heart of all development stages. Tim Brown, president and CEO of IDEO, defines design thinking as follows: “Design thinking is a human-centered approach to innovation that draws from the designer’s toolkit to integrate the needs of people, the possibilities of technology, and the requirements for business success.”

“Most people make the mistake of thinking design is what it looks like. People think it’s this veneer — that the designers are handed this box and told, ‘Make it look good!’ That’s not what we think design is. It’s not just what it looks like and feels like. Design is how it works.” — Steve Jobs

In previous design thinking articles, we explored the different models of design thinking including the IDEO model, d.school model, and IBM design thinking model. Most of these models share the target of achieving innovation through three main factors:

User Desirability. The product should satisfy the consumer’s needs by solving everyday problems through a user-centered process. This can be achieved through a deep understanding of the user and through an empathic design process, which can only be achieved by putting ourselves in the shoes of our consumers (using tools such as an empathic persona map).

Market Viability. Successful products require an integrated marketing strategy that identifies the target segment and builds the product brand in accordance with this target segment. Tools such as the business model canvas can help our understanding of the project and create a business strategy for it. Also, tools such as the SWOT analysis allows us to understand the strengths, weaknesses, opportunities, and threats of the specified product.

Technology Possibility. Technology provides state-of-art tools for designers to innovate and build products that meet today’s needs. Technology should be adopted through the development process, including the prototyping stage where a visual presentation of the product is made to the team.

After Steve Jobs returned to Apple in 1997 (upon Apple’s acquisition NeXT), he started to apply the design thinking characteristics discussed above, which reflected his vision for Apple products. The vision discussed below was used to form Apple’s strategy from 1997 until today. Steve Jobs applied design thinking by focusing on:

The vision characterized above can be clearly identified in modern Apple products. Although other competitors focus on the features and product capabilities, Apple focuses on a holistic user experience.  For example, the iMac is renowned for being quiet, having a quick wake-up, better sound, and a high-quality display. This vision was formed in Apple’s development strategy that includes:

In this part, Steve tended to improve the execution process by closing 2 divisions, eliminating 70% of the new products and focusing on the higher potential products, reducing the product lines from 15 to just 3, and shutting facilities to move manufacturing outside the company. Apple also launched a website for direct sale of its products and started to take an interest in materials and how products are manufactured within a consumer-driven culture.

Apple streamlined their product portfolio to a family of products that can be produced  much more quickly while keeping the existing design elements. Also, the company targeted product that require less repair and maintenance.

The consumer experience should be integrated into the design and development stages through participating in usability testing. Also, the design for interfaces should focus on the user experience.

In addition to the function of the product, the form should beautiful, which can be achieved through continuous innovation and development. Apple also focused on the materials and manufacturing process and took a bold approach to trying new ideas rather than sticking with the ordinary design forms.

Apple’s history with innovation provides a clear lesson about how design and innovation can turn company failure to market success and a leading position in a competitive market. Design thinking helped Apple to innovate while placing their consumers at the heart of the process. The period that Steve Jobs was absent from Apple demonstrates that copying others and lacking a clear innovation strategy can lead companies directly from success to failure. On the other hand, innovation can definitely help build a successful business. 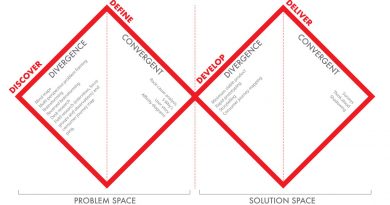 The Double Diamond Design Thinking Process and How to Use it

We explored the design thinking different frameworks in various articles, and one of these models is the Double Diamond design thinking process which the British Design Council developed. Like other 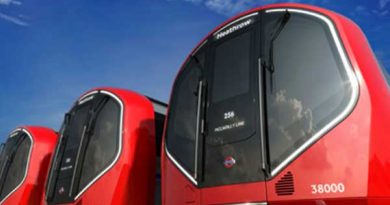 As one of the pioneer countries that established design strategy and focus on design thinking, United Kingdom always tries to maintain the British value in all its infrastructure projects such 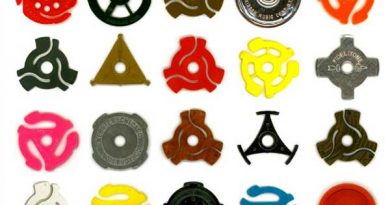 Companies such as Apple, Toyota, Virgin and others provide proof that applying design thinking in the innovation process can make changes not only by creating opportunities, but also by building