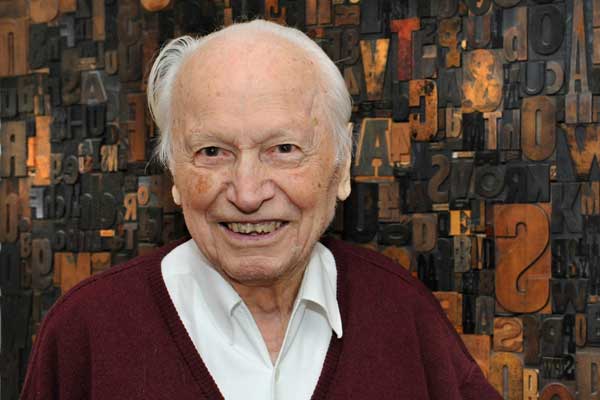 During his versatile life, Zapf invented a wide range of typeface designs. 200 typefaces that range between different styles and alphabets such as Latin, Cyrillic, Arabic, and Cherokee. The Optima, for example, is a mix between thick and thin stokes similar to the traditional san serif font. The font is used by Estée Lauder in packaging. The Zapfino font is a calligraphic font that ships with Apple computers, One of his famous fonts is the Zapf Dingbat, which is a font consists of symbols such as stars, squares, scissors, and point hands. This font is based on the Unicode symbols and built into Apple laser printers in the early 1980s.

“What Michelangelo was to sculpture and Beethoven was to music, that’s what Hermann Zapf is to type design and calligraphy. We’re all followers of his now.” Jerry Kelly, a leading American typographer, calligrapher and type designer

Zapf’s life story is even more fascinating in a complement to his typeface designs. Herman Zapf was born in Nuremberg, Germany on November 8, 1918 just before the end of the WWI. It was a chaotic period, the Spanish flu took hold of Europe in 1918 and 1919 killing more than 20 million people.

During school time, Zapf was interested in technical subjects and studied by reading many publications. One of his best books was The New Universe. Additionally, he was fascinated with all the latest inventions and discoveries. He also invented a secret writing code that enabled him to exchange information covertly. The invented code was a hybrid between Germanic runes and Cyrillic (a spinoff of Japanese) and could be deciphered if the code was in hand.

Zapf left school in 1933 with a dream to become an electrical engineer. But he was unable to join Ohm Polytechnical Institute in Nuremberg because of Nazi suspicion of his trade-unionist father.  He was able to fulfill his dream 30 years later in United States in the field of computer technology.

Zapf started his career as a photo “retoucher” in a 4-year apprenticeship in 1934. Later, in 1935, he visited an exhibition dedicated to the memory of Nuremberger Rudolf Kock (1876-1934). It was the first time he catered interest in typeface. He started to teach himself about lettering and penmanship through Kock’s book The Art of Writing and another textbook by Edward Johnston. He used a broad-edged pen in his early work. His talent was discovered during his work as a retoucher, subsequently his manager had given him the letter retouching work to focus on.

Once Zapf’s finished his apprenticeship, he moved to Frankfurt and worked in Werkstatt Haus zum Fürsteneck, which was run by Paul Kock, the son of Rudolf Kock. He spent his work writing songbooks. In 1938, he designed his first printed type while working with Linotype GmbH in Frankfurt. In 1947, after WWII, he started to work for a Stempel type foundry. Between 1948 and 1950, taught at the Arts and Crafts School of Offenbach (currently known as the School of Design). He worked for many publishing houses and stated “As a matter of principle I did not work for advertising agencies.”

He developed printing types including Palatino, Antiqua, Optima and others. Those types were used for hot metal composition, then for phototypesetting before moving to the digital age. His type Palatino was named after the Italian writer of the 16th century, Giambattista Palatino. In 1952, he designer Optima which was released on 1958 by D. Steeple AG type foundary in Frankfurt. Those two types are a merge between the Roman style such as Bodoni and the sans-serif such as Futura. His biggest writing calligraphic job was writing the Preamble of the Charter of the United Nations in four languages for Pierpont Morgan Library in New York. He was paid 1000 US dollars, which was a handsome amount during this period.

In 1964, Zapf moved to digital type design when Dr. Rudolf Hell invented the Digiset photocomposition machine. Since then, Hermann Zapf started to use typography in computer programs to maintain precise typesetting in book designs. He tried to convince the Technical Institute in Darmstadt to apply computer-aided typesetting, but his idea was rejected and was called crazy. His idea sounded interesting for the University of Texas and they made him a special professorship rank. Later in 1976, he taught at the Rochester institute of Technology. Through his teaching experience, he made contact with such illustrative companies such as IBM and Xerox. In 1980, Zapf met with Steve Jobs in order to choose his types –Chancery, Palatino, and ITC Zapf Dingbats. In 1967, Hallmark Cards produced a film about Hermann Zapf to document his work and experience through the years.

Hermann Zapf’s life is full of inspirations as much as his type designs. He provides an example for designers to follow their passion and talent. His life started with many difficulties in the war time and he was unable to attend the university. He built his life through self learning and practice. Zapf’s persistence to follow his dream and career enabled him to break the barriers that faced him. His flexible thinking and eagerness to learn enabled him o see the future and learn more technologies. Subsequently, he became aware of all the type design processes through the time starting from the hot metal composition to the computer-generated typefaces. Hermann Zapf’s computer fonts can be downloaded Linotype page here.