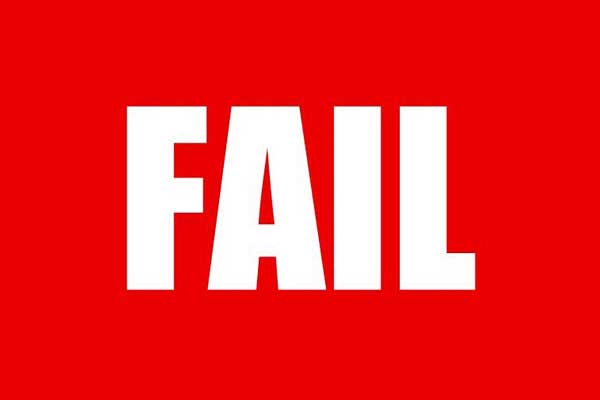 Nothing is worse for designers than failing in a project, especially after spending time and effort in the development of ideas and turning them into a final product. When dealing with failure, most designers respond in one of two ways: they either neglect it and move forward to the next project, or get depressed and fill the air with negative energy or even lock themselves alone in a dark room. This chaotic stage following a failed project hits designers the hardest, making them blind to evaluate the situation correctly; it is part of our human behavior when facing our fears.

On the other hand, design leaders and innovative companies consider failure a unique opportunity to learn and improve one’s self. Tim Brown describes failure as a source of learning for designers: “Failure is an incredibly powerful tool for learning. Designing experiments, prototypes, and interactions and testing them is at the heart of human-centered design. So is an understanding that not all of them are going to work. As we seek to solve big problems, we’re bound to fail. But if we adopt the right mindset, we’ll inevitably learn something from that failure.”

History’s archives show many attempts by inventors, including Thomas Edison. He understood that failed experiments are not actually a failure as long as they add to the constructive learning experience. For example, the light bulb was a result of accumulated lessons gained from thousands of attempts. The Wright Brothers experienced thousands of tries until they achieved their “first flight.”

In the design world, many tend to think that creative designers rarely fail. It is as if innovative ideas come to the designers’ mind in the perfect form we see in the end product or service. However, this is not true. Creative minds go through many stages that range between failure and success in order to reach creative ideas. In a study by the University of California, Professor Dean Keith indicated that creative minds are prolific when it comes to failure; failure just does not stop them, they simply do more experiments until they reach success and innovation.

Based on this data, designers should skip the bad implications of failure and begin to see it from a completely different perspective in order to achieve success. The five lessons that follow can be learned from failure and contribute to converting failure into a successful learning experience either in the same project or for a future project.

Once the design process is set, designers start to follow that process again and again. Companies tend to avoid the risk of making disruptive changes in the project and design process. Many companies fail to innovate just because they don’t dare take the risk for disruptive innovation as it can cost time, effort, and carries a higher possibility for failure.

Once a failure occurs inside a project, designers have the opportunity to understand more about the system and its existing problems. The identified problems in the project could be the main reason for the failure or a consequence of another, larger problem. As we can’t see the problem while we are moving forward, project failure gives us the opportunity to stop and observe the evidence hidden within the system.

Analyzing the failed situation provides a clear vision about the problems that caused this failure, regardless of whether it is the main cause or a consequence of a main cause. Analyzing the failure is part of any problem-solving model to allow the team to learn more about the best procedures that can be taken to solve the problem, then eliminate and avoid repeating it in the future. One of the most powerful methods used to solve problems is the 8D Problem Solving process introduced by Ford Motor Company.

Analyzing the failure and its causes can be an individual activity for the designer or it can be part of a team’s work, especially if the project is large and involves other departments. Executives, CEOs, and design leads should join the conversation in order to reach a clear vision about the problem.

Between 1993 and 2004 Lego, the leading toy making company, faced a crisis. The company laid off 1,000 employees and the company president, Kjeld Kirk Kristiansen, stepped aside saying, “Maybe I’m not the right person to lead this company in the next generation.” The new president analyzed the problem and reached the main cause of the problem: that the company was operating a different way than it was original strategized.

When a project fails or you face problem, the team should ask questions such as “What is wrong? Why did this happened? What could we do to prevent it? What is the mistake that caused this?” While these questions seem to be disruptive and offensive, they should be asked and discussed wisely in order to evaluate the current situation. There are tools available to help analyze the problem, such as the Starbursting, SCAMPER, and SWOT analysis.

In the example of Lego, the company responded to the crisis by simply creating new products to face the strong competition from cheaper products and children’s increased intelligence. However, analyzing the process leads to understanding that new products will not solve the core problem; it was actually short-term products associated with movies such as Harry Potter and Star Wars that propelled it past Lego’s original bricks.

The result of evaluating the results was that Lego learned that in order to overcome their crisis, they needed to focus on its original brick themes and try to innovate using these bricks with new products such as Lego Friends. Lego also continued to develop movie-based themes that did well in the market, including products for the Star Wars films. In addition to the above return to the company’s original bricks, Lego adapted using an open innovation model to allow individuals to suggest model ideas through their website, Lego Ideas.

Unlike incremental innovation, many companies avoid disruptive innovation because it consumes time, effort, and cost as well as potentially putting existing projects in risk. However, disruptive innovation can lead to market success. Companies such as Apple, IKEA, and others provide an example of leading the market through disruptive innovation. In 2000, Apple produced the Apple Cube, a new Apple computer with a futuristic design and function. Apple Cube failed to achieve its expected sales, however Apple used the knowledge and experience they learned from this failed product to develop new materials for their later products such as iPhone, iPad, and iPods.

In the 1960s, IKEA started to adapt a flat packing strategy with all its products to reduce their storage space, transportation costs, and fuel usage. On a sustainable level, the new packaging strategy led to more sustainable process through lowering the carbon emissions. Failed projects can give designers the chance to consider new innovative products and processes.

Criticism and feedback plays an essential role in the design process, as designers depend on both consumer and team feedback to improve products. Many design process models provide a feedback stage at the end of each process to learn consumers’ ideas and their experience with products. This feedback is used in next product cycles to develop products and services.

Many designers tend to avoid criticism and feedback that interferes with their creative thinking. However, this feedback can be used to guide designers for a better thinking process. While brainstorming and mind mapping sessions can help designers to learn team feedback at the beginning of the project, consumer feedback provides an opportunity to improve products after delivering the final product. This feedback becomes more valuable when the projects fail because it provides a wider understanding of the reasons that may cause this failure.

Failure is a devastating stage in project process and many companies believe there is nothing worse than a failed project. Designers need to overcome the bad impacts of failure and start to think of it as a learning experience. Many lessons can be learned from failed projects such as identifying and evaluating the problem, using failure as an opportunity for innovation and change, and embracing feedback and criticism as an essential stage in the design process.