The notion of brainstorming was first introduced by the advertising executive Alex Osborn in 1939 and was published in his book, How to Think Up, in 1942. The basic idea behind the group brainstorming sessions is that privilege the diversity expertise inside the organization to develop innovative ideas and solutions for problems. it aims to encourage the team members to develop original and creative ideas. These ideas are discussed by other members to create more diversities of the main idea. Group brainstorming aims to avoid criticism and break the thinking patterns to increase the possibility to produce innovative solutions.

The group brainstorming sessions are widely adopted by different companies. However, does it have a positive impact on the innovation capabilities of the organization? Is it a tool that we can depend on? Osborn claimed that brainstorming can improve creative performance by 50% comparing to thinking individually. He provided an experiment that included US Treasury employees who were able to develop 103 ideas for selling saving bonds in 40 minutes. However, the later researchers have concluded absolute opposite results!

Why Brainstorming is a Waste of Time

In 2010, a research, Productivity Loss in Brainstorming Groups: A Meta-Analytic Integration, has been conducted by a number of researchers at Syracuse University for more than 800 teams. The results of the research have shown a higher number of original ideas were generated when the subjects of the experiment worked alone and didn’t interact with each other. The research also included that brainstorming is negatively affecting productivity, especially in large teams.

The Harvard Business Review’s article, Why Group Brainstorming Is a Waste of Time, highlighted four possible reasons behind this decline in productivity when teams are working together. These reasons include the following:

Social loafing: People tend to make less effort when they are working in teams comparing with working alone
Social anxiety: People feel worried about how others are viewing their ideas, which negatively affecting their performance and ability to generate creative ideas
Regression to the mean: When people with diversity of skill work together, they tend to match their performance with the less talented part of the group
Production blocking: regardless the number of members in the group, people can only express one idea if they want other members to hear them. Accordingly, the number of ideas generated per person declines when thinking in a group

According to to the above, the brainstorming is not as effective as we used to think. It, probably, is just a waste-of-time tool that gets the team to nowhere. There other alternative tools that can help us brainstorm ideas such as the following:

SCAMPER Technique is a tool to address targeted questions that help solve problems or ignite creativity during brainstorming meetings. The name SCAMPER is acronym for seven techniques; (S) substitute, (C) combine, (A) adapt, (M) modify, (P) put to another use, (E) eliminate and (R) reverse. These keywords represent the necessary questions addressed during the creative thinking meeting.

The Six Hats of Critical Thinking 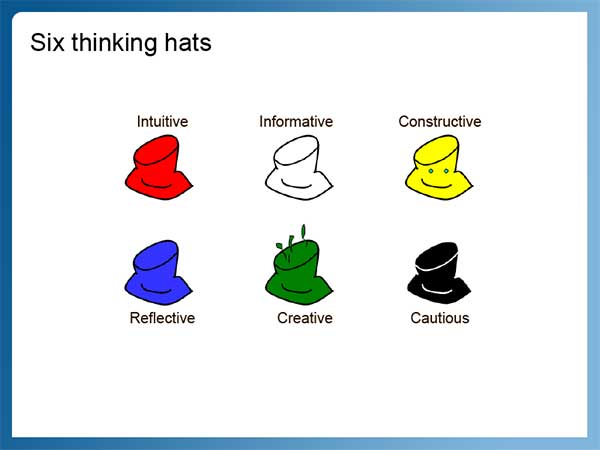 The above two tools assume that we have an idea or number of ideas about the solution that can be discussed and evaluated amongst the team during the session. However, what if we still don’t have an idea on hand to discuss? Apparently, we need a wider scope tool that covers the process from an early stage before developing any ideas. One of the tools that can cover the idea generation process with a wider scope and allow team members to think individually is the design sprinting process, also known as Google Design Sprint. It is one of the design process models developed to build user-centered products and services. It uses both the agile and design thinking methodologies to develop ideas and solution for problems in a short time involving a group of stakeholders.

The Google Design Sprint is based on 6 stages as listed below:
1- Understand – Introduce the problem and provide all the information need to understand it
2- Define – understand the target consumer and define the problem in a form of 1 sentence challenge
3- Diverge – each member in the team set individually and start o generate draft sketches for their ideas in five minutes
4- Decide – All the sketches are hanged so all the team members vote for the best idea. At this stage tools such as SCAMPER technique and the size, thinking hats can be used to evaluate the ideas
5- Prototype – the whole team work start to create a complete prototype for the solution
6- Validate – The team start to test the idea, collect feedback, and iterate the idea in order to improve it

While the Google Design Sprint is a complete process, the steps from one to four can be used to replace the group brainstorming sessions. However, the design sprint has more advantages that can be gained if the complete process is applied. These advantages include the following:

Time: While the group brainstorming sessions can run forever without getting any effective output, design sprinting aims to reach a solution in a limited time. The team works based on a timeframe of around 5 days for the whole process. Each stage takes around one day

Creative zone: Many designers don’t like to work in groups. They need time to develop their creative ideas before presenting it others. The group brainstorming doesn’t provide this space. Design sprinting allows designers to develop their ideas individually before discussing it with the team in the Decide stage

Agility: The team can jump between stages with flexibility in order to iterate the idea and improve it. Also, it allows the team to jump quickly from individual ideas to group discussion and vice versa in order to reach a prototype of the solution that can be tested

The Design Sprint provides a complete solution that considers the importance of giving time for designers to think in ideas individually before sharing it with a larger audience. Additionally, it follows the agile and design thinking methodology that aims to quickly jump to building the draft prototype for solutions in order to evaluate it based on visual sketches. This flow provides an efficient method to create empirical ideas in a limited timeframe. 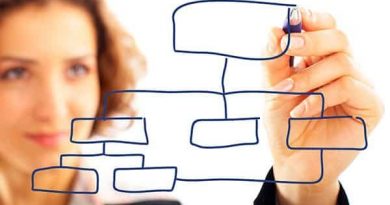 How to Run a Successful Brainstorming Session